Now the Hoosiers will have a coaching staff departure to deal with as – according to Scout.com‘s Evan Daniels – Indiana assistant coach Kenny Johnson will take the same position at Louisville.

Johnson spent the past two seasons at Indiana after previously spending a season as an assistant coach at Towson and he’s regarded as a major recruiter, especially on the East Coast. Johnson has deep ties to the loaded Team Takeover grassroots program in the Nike EYBL — where he’s a former coach — while also serving as a coach at high school powerhouse Paul VI in Virginia.

Johnson struck again in the 2014 class as he helped land Richmond, Virginia native Robert Johnson — no relation — and Johnson was also active in staying on McDonald’s All-American James Blackmon Jr. after Blackmon decommitted from Indiana, only to recommit last fall.

How much slack does Crean really have? Seems like the dude should be clapping less and winning more.

Other Teams Pursuing That
Geronte

Other Teams Pursuing That wrote:How much slack does Crean really have? Seems like the dude should be clapping less and winning more.

I don't think much slack at all. IU fans have put up with a lot of bullshit down there for a while now without much to show for it, and I suspect he's on a a pretty short leash at this point. 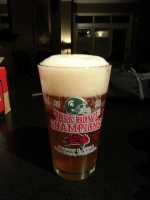